Holmes & Watson -The Curious case of the Missing Sausages 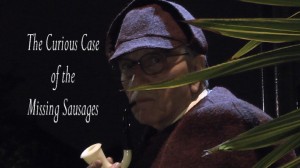 Written by Eric Fowler, who stars alongside John Fisher as Sherlock, this short film depicts the famous detective and his friend, Dr Watson, living in the present day in Worthing. The case revolves around the some missing sausages and the disappearance of a butcher’s boy, played in his own inimitable style, by John Lovell. Part of the action takes place at a well-known butcher’s shop at Goring and for this, we are very grateful to Chris White of Knight Butchers. The film had its own peculiar challenges. These included some major sound problems due to traffic noise and the ever-present drone of refrigeration equipment inside the shop, which required experimenting with dubbing – a mystery in itself! Did Sherlock get to the bottom of the mystery? Did he find the sausages and whatever became of the Bert, the butcher’s boy? Hopefully, all will be revealed on 12th November. Don’t miss it. My thanks to all the cast and crew on this, my first attempt at directing drama, especially Richard Stockwell for putting up with my demands during the edit process and to his wife, Janet for my constant presence at their home over the last couple of weeks.