SDFM’s competition success continued in April at Weymouth Movie Makers’ third year of holding the ‘Penny Cup’ – an open competition for clubs and individuals for films up to 15 minutes in length. 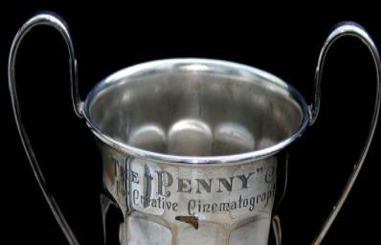 In total, 23 entries were received for this year’s competition with ‘Dead on Time’, directed by Mike Spanton and written & produced by Brian Meetens, being awarded the Penny Cup trophy (left) plus the Overall Winner’s prize of £25.  The judges commented that they were kept on the edge of their seats throughout and they particularly liked the clever twist at the end of the film. Second place went to Surrey Borders Movie Makers for their supernatural comedy / thriller, ‘Is There Anyone There?’  Third place was also awarded to SDFM for David Allen’s comedy drama, Stay for the Raffle.(Both SDFM films can be seen from the ‘Our Films’ main menu option).

Congratulations and well done to everyone involved in the making of these films.