17th July saw club members bring along their own cameras together with some inspirational object which could be filmed. The idea being to film one or more different objects on the night with a view to producing a one-minute film for showing later in the year. 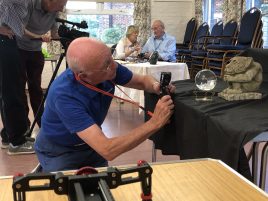 Michael and David organised the evening, and many different objects appeared. Different types of cameras were used varying from small action cameras, to smart phones, club Panasonic cameras to a Canon 5D MkIV.

We are looking forward to seeing the final products.

Photo: Jim Anderson using his 4K pocket action camera to film some of the objects.