The forthcoming club evening on Wednesday 20th September is your opportunity to be transported back in time to a land of laughter and thrills; to a time when we used to make films on actual photographic film, and to the early days of South Downs Video Club, when we still had to make films on film because film  competitions wouldn’t accept video! 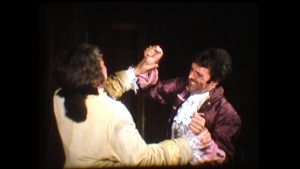 Two squires fight for their rights in this scene from ‘LEGEND’

You’ll find out about the centuries-old dark legend from our area that still exists to this day. You’ll see the very first robotic home help – the perfect butler, and you’ll uncover the secret of the counting numbers; to say nothing about the fly-on-the-wall filming of the pipe smoking gentleman walking through Shoreham carrying his own ‘WC’!

Completing the programme, there are award winning films from our own library plus international award winners.

The evening, with the accent on entertainment, is being presented by long standing SDFM member John Guile, together with Brian Meetens, one of the founder members of SDFM, and includes films made by the predecessor club to SDFM, Shoreham Cine Club – a club that had its own cinema with real cinema seats; a cinema that could be converted to a studio for film making. 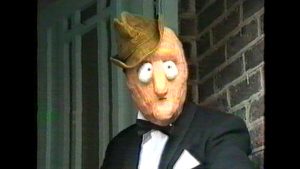 Artificial Intelligence in the early days! A scene from ‘THE PERFECT BUTLER’

Come and enjoy some of the films made by the club over the years. It’s all happening at the club evening on Wednesday 20th September.