There was a varied selection of locations and topics, including Irina’s excellent film about the controversial bronze statues ‘Children are the Victims of Adult Vices’, in Moscow’s Bolotnaya Square. The sculptures are of thirteen figures, which depict adult vices such as alcoholism, drug addiction, and prostitution, that affect children. The figures are perceptibly closing in on two unaware playmates, a girl and a boy, with the centrepiece figure being ‘Indifference’. The artist, Mihail Shemyakin (Chemiakin), was a bit of a rebel in the Soviet art world, and in 1971 was forced to leave Russia and now lives in France. However he appears to be accepted back into Russia for special projects, including sculptures, films and theatre, and this sculpture was commissioned by the City of Moscow in 2001, albeit amid some controversy.

However, the winning film (as voted for by the members present on the evening), was Mike Spanton’s ‘You wouldn’t like…..’. This featured aspects of a cruise which trempted viewers to think about whether they really would like cruising as a holiday. 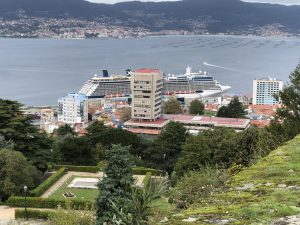