The Show must go on

The Show must go on –

With a little bit of luck

We are giving video shows in the near future to a variety of organisations. The Hove reform Church, St Leonard`s Church Portslade, Ferring Riffers Club, Arundel Rotary Club and the Ramblers Association Worthing.

On the 4th January this year, we visited St Andrew`s Fellowship at the Old Palace Tarring, for about the fourth time. Peter Everett, Peter Blaney and myself set up the equipment in a fine old hall, built in 1215AD. Mullioned windows, walls 2ft thick, high timber roof, three chandeliers with 25 bulbs on each, electric heaters around the walls and a polished laminated wood floor. The third film of the afternoon was “The Final Twist”.

Robb Marshall was expleating “His b… relatives “ when there was an almighty explosion.

The picture slid off the screen. The floor had split the width of the hall, 25ft wide with the apex of the split rising approx. 5 to 10 inches high.
Unfortunately, the two rear legs of the projector stand stood on the forward slope of the fault, and our beloved projector toppled into the air and gracefully tipped forward in to the floor. There it lay on its back, the light extinguished. What had happened? Underfloor power cable exploded? Methane gas? Earthquake? 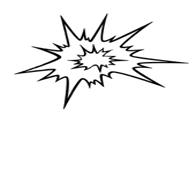 The actual cause was dampness, and the warmth had caused the laminated wood floor to expand. A white faced audience looked on as Peter and I gathered up the equipment, reconnected the cables and gingerly switched on the VCR, then the amplifier and finally the Sanyo projector. It worked, a light appeared on the screen and we carried on with the show.
Sanyo say we were very lucky the valuable bulb didn`t shatter, but they are going to check the alignment of the optical system, a liquid crystal display technology being used.

You will have noticed both Peter and I now have a nervous twitch.