The Danilo was the largest of three cinemas in Hinkley, having 1,100 seats with tickets from 1/6d to 3/4d and a huge CinemaScope screen. Met by the area supervisor, I was embarrassed to be present at his sacking of the resident manager who was to be replaced by me. I was only 26 years old and the film that day was ‘ There’s No Business Like Show Business ‘! 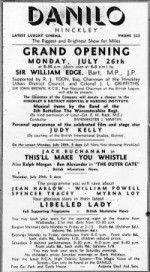 The staff, particularly the team of six projectionists, where hostile to me but after changing the ‘Chief’ the rest and I settled to a happy and industrious time of promotions, publicity stunts, charity shows and dine/variety evenings. Two things bugged me: the large amount of paper work and unruly teenagers whom I eventually tamed.
Four years later, in 1958, I was fortunate in being appointed manager of the Commodore Theatre, Ryde. Not an Essoldo but an independent of 1,560 seats plus ballroom and restaurant. We moved to the holiday island and my salary leapt from £12 to £15 per week. 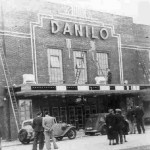 The large foyer boasted grand staircases and the box office was a replica of the aft of Nelson’s flagship, Victory. A capacious and fully equipped stage had housed pantomime and summer shows. Sunday night live shows were to continue with films on weekdays. We ran South Pacific and The Guns of Navarone alternately for a whole summer season. I was able to direct occasional plays and organise many publicity stunts (what has happened to showmanship?). It was heaven.
But nothing lasts. Southern Television (now Meridian) opened in Southampton and a dark shadow swiftly fell across live and cinematic entertainment. The Commodore was sold and in 1962, although kept on by the new owners, I began looking for a better future………………..