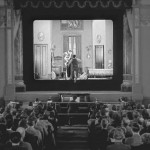 My life has centred around show business, much of it revolving with the flickering shadows cast by a turning reel of film. 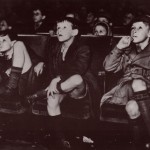 My sister, required to look after me, pulled me into the scramble for seats in the frightening blackness of the ‘twopenny’ (‘tup’ney’) rush on Saturday mornings, where, squashed two to a seat, most kids preferred the front row so that orange peel could be thrown or pomegranate seeds spat at the baddie. 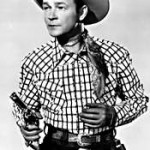 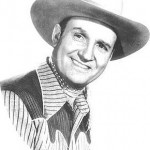 influenced my own singing which by the age of 10 won me a talent contest at ‘The Gem’ picture house and it was here that my show business career was established. The manager booked me for several concerts in his cine/variety shows, but importantly allowed visits to the projection box, via a vertical iron rung ladder that rose from the foyer.
Enthused, I soon had my own toy projector. Bought from Woolworths for one and eleven, it stood about six inches high with a small reel to take professional 35 mm film, wound by hand. Fitted with a torch bulb, the power source was a battery borrowed from my Dad’s cycle lamp, causing him to push his bike home from work. The projector made a rectangle of light on a piece of white card about six by five inches. If only I had a film!

My cinema manager friend came to the rescue with a pair of scissors, cutting a few yards from that week’s second feature.
My silent movie of a man sitting behind a desk ran for nearly 30 seconds. Longer if I wound slowly.
Soon I was to enjoy a more sophisticated machine………………
CUT
Take 2 to follow.