DID WE SET A TREND?

Some years ago, BBC TV ran a British comedy series about a group of incompetent safe crackers.

A few years before that, we wrote and filmed ‘Rough Luck’ a comedy all about a group of incompetent safe crackers, who were using the proceeds to supplement their pensions. The film became very successful and was screened at a number of amateur film festivals throughout England. The film also spawned three sequels, ‘That’s the Spirit’, ‘Brotherly Spirit’ and ‘Heavenly Spirit’.

This April, Ferring Film Society’s feature movie showing at Ferring Village Hall is ‘Golden Years’ a British comedy about a group of retirees who decide to rob a bank to supplement their pensions. 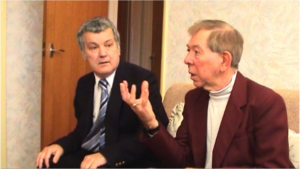 Howard Johnson & Brian Meetens in a scene from SDFMs ‘Rough Luck’, filmed in 2005

I know it’s said there are only a very few original plots and all stories since then are based in some way, on those originals, but did SDFM set a trend with ‘Rough Luck’?