Film festivals are definitely like buses, you wait ages for one then two come along together.

This was certainly the case with the recent Inter-Club competition at Surrey Border Movie Makers at Farnham, and the Sussex Film Festival, at Wivelsfield Village Hall, Wivelsfield Green.

The Surrey Border competition was held on the evening on Friday 6th October. There were four films entered in the competition, “Gift of Love” from Reading Film and Video Makers, “Almost Perfect” from Sutton Film Makers, “To Eleanor” from Staines Video Makers and our own SDFM entry “Travel Companion”.

The winner was “To Eleanor” from Staines Video Makers who incidently also won last year. The film showed a teenage girl coming to terms with the death of her twin sister. The judges for the evening were David Prayers and Peter Frost.

“Sydney’s Search” from SDFM was not an entry in the competition but was shown as an entertainment in the second half and was very much appreciated by the audience.

The whole evening was very friendly and pleasant with eight films shown in total and a good chance to meet members of other clubs and swop ideas. 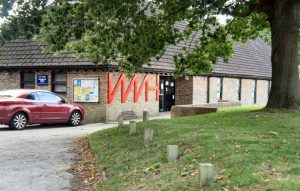 On Sunday 8th October at the 48th Sussex Film Festival, SDFM enjoyed another successful year picking up three awards for our film “Travel Companion”. The three awards were the Acting Award, Comedy Award and the Best Club Entry.

Twenty seven films were listed in the programme and the majority were shown with a very wide range of subjects, technical quality and durations. SDFM had also entered “How does your garden grow”, “The Picture” and “Turn it up” all of which were shown and much appreciated by the audience of around forty people.

The Judge’s Challenge Cup was awarded to “Stuck in the middle“ from Jack Butler and was a very modern well produced tongue in cheek drama about what might happen when we die with a recently deceased young man being interviewed to see if he would be going to heaven or hell.

The Audience Favourite film was awarded to “Hero in bronze”, a very well executed documentary showing an artists journey from first commission to unveiling a memorial statue. This was produced by Clive Hand from Middleton-on-Sea.

The judges were Bob Lorrimer and Dave Whitworth from Huddersfield Movie Makers, both very experienced and well respected film makers.

Other topics featured included a year in the life of a farm featuring some very good drone shots, a film about hop picking in Kent, a couple of murders, the trial of a pirate and several comedies. Overall a wide range of mostly very watchable films.

Seven SDFM members attended and enjoyed an excellent buffet and interesting and diverse selection of films. Overall it made for a very enjoyable afternoon and evening. Our thanks go to the festival organisers who worked hard to prove a very good festival.